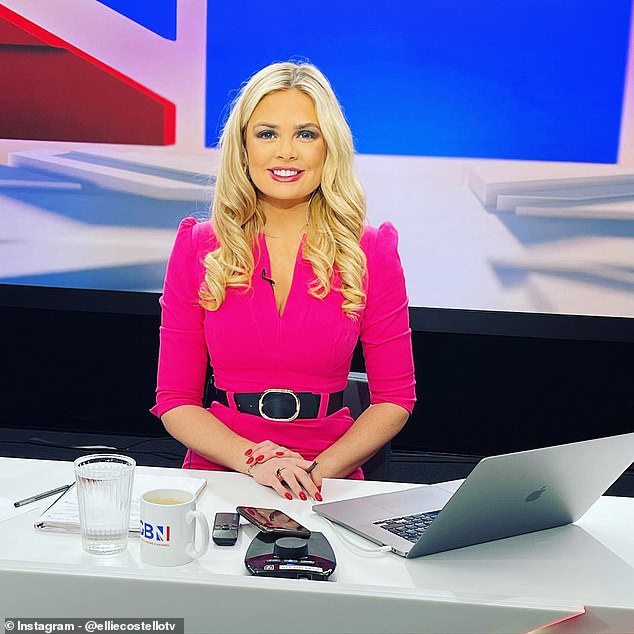 A GB News presenter says she has been put through a year of hell after being stalked by a former Airline star who appeared on her show as a guest.

Ellie Costello was left fearing for her safety  and suffering from ‘panic attacks’ after Leo Jones blitzed her with creepy messages.

Miss Costello bravely revealed her ordeal after Jones, who found fame on ITV reality show Airline before reinventing himself as a ‘travel expert’, was given a five-year restraining order today.

The 41-year-old was also given a suspended jail sentence at St Albans Magistrates’ Court for his year-long campaign that left her in ‘constant stress’ and having ‘sleepless nights’.

Speaking to the Daily Mail, the 29-year-old said she had never actually met the father-of-two in the flesh – having interviewed him over Zoom – before he started showing up at her filming locations.

On one occasion, he made it into her studio at 5am but thankfully she was not at work that day.

GB News presenter Ellie Costello on set. Miss Costello says she suffered a year of hell after being stalked by a former guest on her show 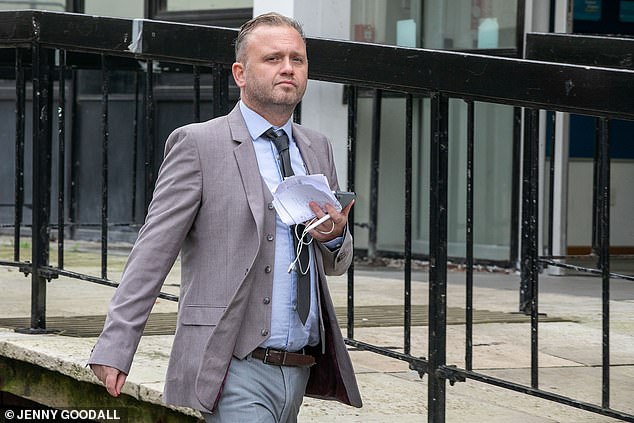 Leo Jones outside St Albans Magistrates’ Court. The 42-year-old has been given a five-year restraining order forbidding him from contacting Miss Costello 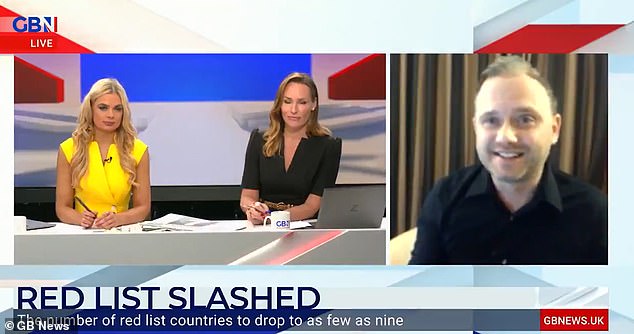 Jones, a self-styled ‘travel expert’ appeared on GB News where he was interviewed by Miss Costello (pictured)

‘I was crying in the witness room before I came into court today, it took everything in my body to do it but I wanted to court to hear me in person in my own words what this has done to me,’ she said.

Jones shot to fame in Airline, which ran for eight years to 2006 and followed the lives of EasyJet workers through the highs and lows of airport dramas, making them small-time stars.

He latterly presented himself as a ‘travel expert’, analysing the industry under Covid-19 travel restrictions and was first interviewed by Miss Costello on GB News in August 2021.

Following the broadcast the pair exchanged messages thanking one another but nothing further.

He was interviewed by Miss Costello again in October that year, after which he suggested they should present a travel show together before later telling her: ‘I love seeing you in the morning X’

When she didn’t respond he followed up with ‘you take my breath away’ and then, over the next three days ‘You motivate me beyond words’, ‘I love seeing you’, and ‘You are my sunshine I love you’.

When Jones then asked: ‘How long do I have to wait to see you it is driving me insane,’ Miss Costello finally replied, telling him: ‘Please stop messaging me it is beyond inappropriate.’

But the court heard the messages only stopped for three months before Jones, using a separate Instagram account, says: ‘I know I’m not supposed to message you but thank you for everything you do for the travel industry,’ followed by ‘No one will ever come close to you’.

Miss Costello then blocked all his social media accounts from contacting hers.

In June this year, Jones turned up at the GB News studio in Paddington asking whether she is available before later sending flowers with a message: ‘Something to say a good morning from Leo X.’ 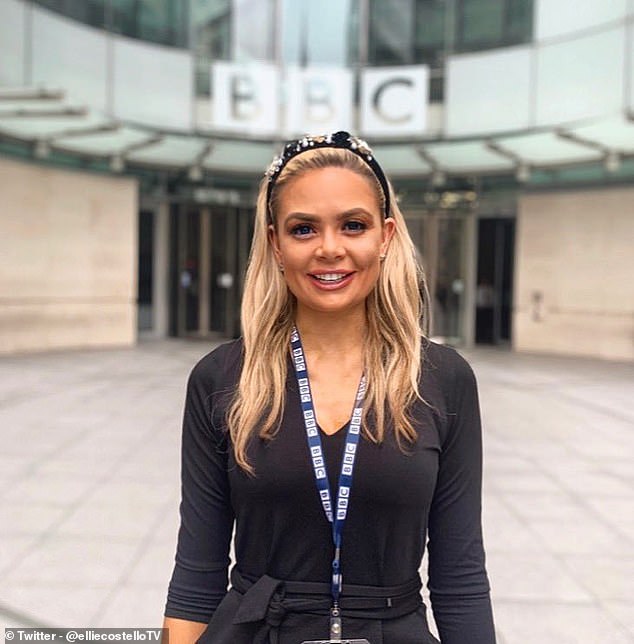 Miss Costello says she received creepy messages from Jones, which continued even after she told him to stop

Miss Costello also received and email from Mr Jones through her website that read: ‘Ellie I don’t want to be like a stalker I have feelings for you you have been pivotal on my journey’.

On the day of the Queen’s funeral, as she broadcast from crowds on the Long Walk at Windsor, the reporter saw Jones ‘with his hand in pockets, laughing and walks towards her’.

Frantic, she called the police but was unable to get her words out, spluttering just ‘stalker’ as a panic attack kicked in. By the time the police calmed her down, he had disappeared.

Miss Costello bravely addressed St Albans magistrates’ court from behind a curtain yesterday detailing the harrowing impact Jones has had on her life and work, including being given a bodyguard.

Describing the incident on the day of the Queen’s funeral, Miss Costello said: ‘I’ve been left shaken in the aftermath of Leo Jones getting so close to me.

‘I had a panic attack, I couldn’t breathe or speak, when I realised he had got so close to me I really freaked out. He must have followed me after watching my broadcast that morning.

‘It has made me nervous about getting out of cars and going to places by myself. In my job it is impossible not to say where I am, I have a security officer to make me feel safe at work. 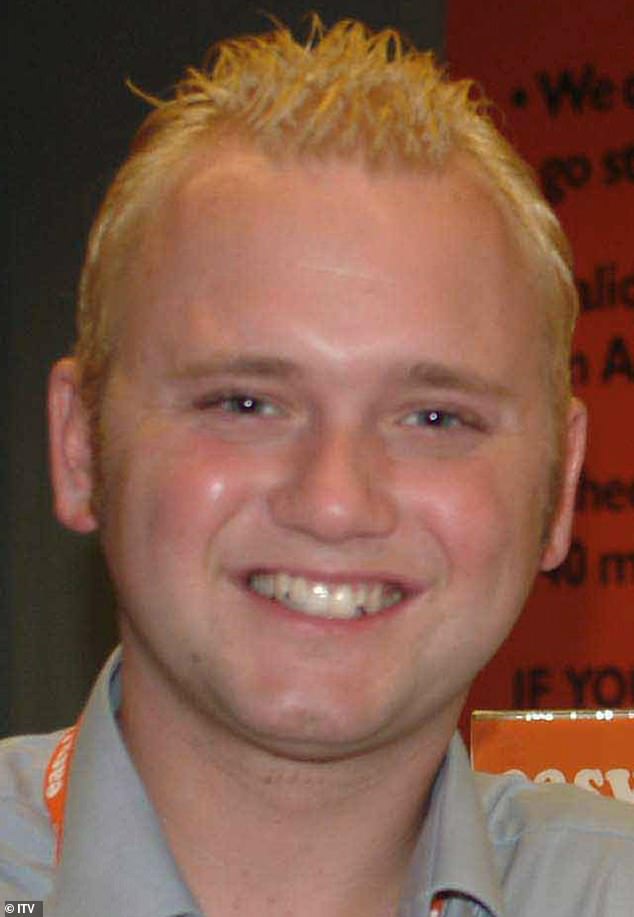 ‘The security officer has taught me ways to help keep myself safe, to wear less bright colours, to tie my hair up, how to position myself in relation to a road, to face outwards to see threats coming. I have had to change how I behave at work and everyday life.

‘I would not wish this upon anyone. I just want to feel safe and safe at work.

‘The last 16 months have been ones of constant worry, constant stress and constant strain on my life.

‘The thought of seeing his face makes me cry. I am frustrated at myself for letting it go on for so long.’

She later told the Mail: ‘Some men watch female reporters and think they know you. He clearly felt by watching me that he knew me very well and we were in a relationship.

‘I got the sense he was very delusional despite the fact we’ve never met in person, he acted as if we were in a relationship.

Jones pleaded guilty causing the presenter serious alarm, distress and mental anguish and was given a 26-week custodial sentence, suspended for two years, and a five-year restraining order.

He is now a carer for his elderly father, the court heard.

Miss Costello added: ‘All I wanted out of this was a restraining order because then I can feel safe. So the fact I’ve got one for five years is fantastic.’